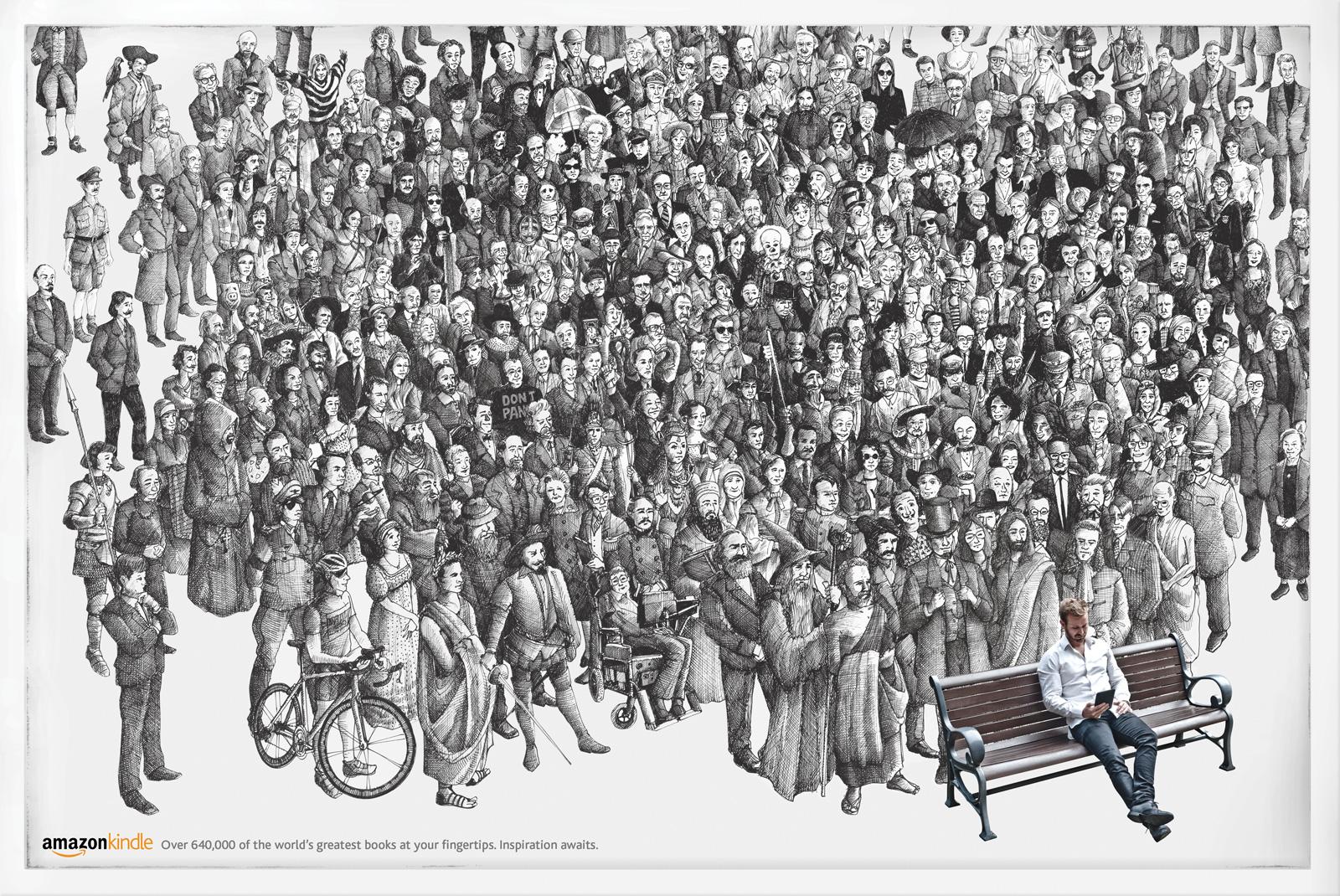 I feel privileged to be working with some fascinating brands and their teams not just on articulating their brand propositions (strategy), but also on the plans and actions to get these heard (tactics). It is the combination of both that provides depth, learning and continuous enjoyment in the fast paced world of 21st century brand management.

An area I currently spend quite a bit of time on is unpacking the nuances between building awareness (brand, desire) and stimulating transactional value (demand, purchase). On the latter there are, of course, multiple ways that lead to Rome. A few of these have just been paved – others are unchartered yet.

Take native advertisement (or put simply, promotional content made to look like editorial) for instance. Native content is not new – we used to call it ‘advertorials’ – and it is a very effective way of cutting through the messaging clutter. You are more than twice as likely to look at a ‘native post’ than at a banner ad, native content increases brand affinity by nearly 10% and it boosts the likelihood for you to move on to purchase by a whopping 18% over traditional ads. And as an industry, the prospects are rosy, too: it is estimated that US native ad revenue will go from around $20.9bn to $36.3bn by 2021.

When looking at the latest developments in advertising and listening in on the discussions amongst the insiders of the trade however, it appears that the advertising profession will rapidly move beyond even native advertisement.

In an era of radical transparency, machine learning will no longer be limited to simple data feeds such as transactions and geo-demographics. Advanced Programmatic Advertising has the capability to tailor the content of a brand to the right psychographic segment at the right time, in the right context and in the right dosage. Precise, highly personalized and non-intrusive – this is Facebook Dark Posts on steroids. Advertisement becomes so native that communication will be almost unthinkable without it, providing perceived depth vs. a shallow, promotional messaging. The effectiveness of such tactics, even though still in their embryonic stage, is likely to revolutionize not just how marketers target their messages, but how we consume content more broadly.

Precise, highly personalised and non-intrusive – this is Facebook Dark Posts on steroids.

The boundaries of what is real and what is not will continue to blur. It will be increasingly hard to distinguish between fake news, real stories – or cleverly packaged, branded content. For marketers, the common thread though is depth, and it provides huge opportunities. In a world where shallow and fast prevails, depth is the antidote and the trigger to creating relevancy. But depth is hard to get – like relevancy, depth is subjective and depending on a number of individual variables such as timing, context, consumer mind-set etc.

In a world where shallow and fast prevails, depth is the antidote and the trigger to creating relevancy

Ideal Advertising (IA) offers depth in a nutshell. It has much in common with Advanced Programmatic Advertising (APA), except that it is more about human-to-human rather than media-to-human. What APA has in common with IA is the fact that they both prioritize precise personalization and value as opposed to pushing volume or spreading messages as far and wide as possible. What factors make up the sine qua non of ideal advertising?

IA will inevitably be accepted as eminent works of advertising. Ideal Advertising moves beyond the B2B or B2C spectrum to H2H – Human-To-Human. Specifically, H2H involves organising experiential mise-en-scenes, elevating the quality of relationships, employing strategic narrative (…) and of course, precision in data mastery.

Whilst there are some examples out there, these are still fragmented and we have yet to see the (likely) tech player that can crack and bridge the technology to take native advertisement to the advanced state of Ideal Advertisement. Here is what I consider a beautiful example of how a brand (GE, in this case) can take advantage of creating quick depth by transcending a story interesting enough but unknown to most: Taking Native Advertising to the Moon With GE-Produced Sneaker – and selling out in 7 Minutes.

The combination of depth with speed and data is a conundrum. How can we create depth in an instance with consumers in order to create relevancy (brand, awareness) and trigger transaction (demand, purchase)? Here is a practical, tactical decision-making table (I don’t claim this to be complete) that comes in handy prior to investing time, effort and capital in creating the next big campaign: 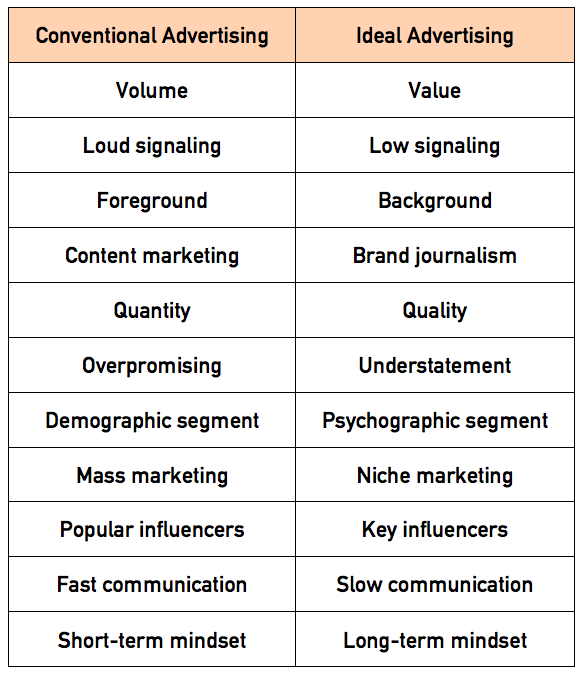 There is a catch however: the combined evolution of Advanced Programmatic Advertising and Ideal Advertising requires clarity on segmentation and above all, clean, up to date, precise consumer data. In my experience, most brands are not even there yet. The biggest opportunity in leveraging the benefits of combining the best of these two worlds is where companies have access to small, clearly understood market segments. Niche brands or B2B where individuals are targeted would serve well as starting points, for instance. In simple words, the more mainstream a brand is, the less likely it is to possess the capability in getting the precise segmentation right and therefore the targeting needed for successful execution correct. Consequently, the less likely it will master the notion of Ideal Advertising.

Sometimes an ad just strikes us as genius, relevant or ideally both. We might therefore intuitively accept it as an ideal type of advertising, because it simply feels right. The reason lies in the ad talking to our perceived-self in the future. Or in other words, it is imported from the future, so to speak. The normal ad of tomorrow can be perceived as an ideal (and an exceedingly native) kind of ad today. There are, by the way, plenty of examples of ads made with techniques imported from the future and many of them can be found at the largest archive of psychographic ads (Source)

Here is a simple 7-step guide to bridge thinking of today with (consumer-)relevancy of tomorrow:

Despite speed, radical transparency (data) and artificially intelligent algorithms, I believe that successful advertising experts will rely on the same means that poets always have. The key upshot that the ad men and women of the future will focus on is what the poets have almost always emphasised on: to make new things familiar and familiar things new for the reader.

In a time where customer centricity also means that consumers choose what they want to see, when and where, this will make the difference that makes the audience actually want to be advertised to.